Explorer Lieutenant de Freycinet, who charted the Australian coast in 1803 in the company of Nicholas Baudin. The land around Port Leschenault was explored by the Swan River colony’s Surveyor General, John Septimus Roe, in 1830 and was further investigated by Lieutenant Bunbury in 1836. After Captain Stirling began a settlement at Perth in 1829, a few settlers came to the Bunbury region from about 1831

.However, in London in 1840, a town and farming enterprise was being planned, to be created at Australind. The company acquired some 103,000 and another 63,000 acres of land in the area.This enterprise was begun by a company called the West Australian Land Company, in accordance with the settlement principles of Edward Gibbon Wakefield, that land should be sold, not granted, with profits going back to transport more immigrants and labourers to expand the settlement. The idea was for land owners to be allotted a town block and farming land.  There were to be farm labourers brought in to work these farms.

It was intended that Australind would have a port suitable to carry farm produce and horses from Australia to India, hence the name “Australind”.The plan failed even before it was begun. Before Marshall Waller Clifton and his people arrived here in four little ships at Australind, the company in London was facing difficulties and many of its backers pulled their money out of the scheme.

So instead of the thousands of people coming to the town, only a few arrived, and many of those went elsewhere when they realised that there was insufficient housing, work or supplies to keep them here. The soils were sandy and unsuitable for the kind of farming these people had done in England. Extreme weather also played its part, and by 1843 the settlement had failed

Those who did stay became the area’s pioneers, and through sheer hard work dug out of the soil a livelihood for them and their families. Many of the South West’s families are direct descendants of these frontrunners.  From Australind they spread out and settled other areas of the South West.Today there is little of the grand plan designed by Wakefield.  The only site mentioned on the plan that is still here today is the Australind Cemetery on Mt Claremont.

There are a few buildings in Australind from that early period, however, and these are most interesting to the visitor. 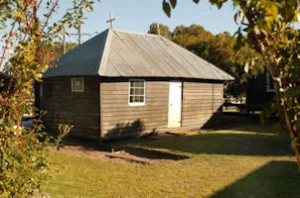 St Nicholas Church. This tiny little weatherboard building stands opposite Henton Cottage, and was originally built as a workman’s cottage. It became a church in 1848. It is believed to be the smallest church in Australia, with measurements of 8.2 metres in length, and 3.6 metres in width. 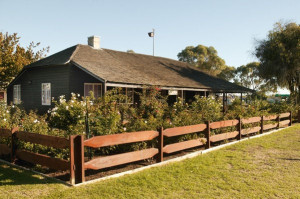 Henton Cottage (circa 1841-2) is a jarrah weatherboard clad, one story building, in Paris Road.  This was originally designed as a hotel for early Australind pioneers. In recent years it has been renovated and for a while was used as a residence by the Nutley family.  These days it houses an art and craft gallery, with a multitude of old and precious memorabilia.

Upton House (1847) on Old Coast Road. This is a double story brick construction, with much of the building materials coming from England as ballast on one of the early ships. Originally planned as a residence for Marshall Waller Clifton’s sister in law, 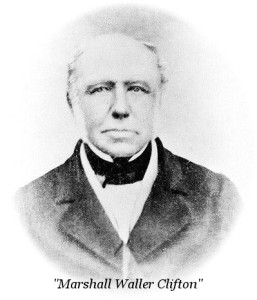 Alverstoke. In 1842 the land was signed over to Marshall Waller Clifton.  By 1844 they had planted 56 acres of wheat, nine acres of barley and two acres of potatoes.  Originally the family lived in a bark slab hut, until a brick homestead was built.  Both these buildings stand at Alverstoke today, although they have been renovated over the years.
A visit to Alverstoke is a step back in time, and well worth a visit, with sheds and outbuildings all kept in good condition by John and Mary Clifton, descendants of M.W. Clifton.  The rose garden holds examples of the original roses brought from England.  Alverstoke can be found on Clifton Road,  the road between Australind and Brunswick Junction.

Although the Australind settlement project was officially abandoned in 1875, today it is a thriving, fast growing community. There are both private and public schools, churches of all denominations, shopping centres, and industry.  The outdoor activities include fishing, crabbing, boating and surf sailing.  Many sports are also catered for in the area.  Australind, although encompassed by the Harvey Shire Council, is only ten kilometres from the city of Bunbury.  It is a wonderful place to live.

So perhaps in hindsight, Edward Gibbon Wakefield and his backers were correct in their choice of place for settlement